Dig put up another cool Refresh edit yesterday, some "Solid riding", as they say.


Chris Harrison's got a cool little "Rapid Response" thing over on Dig too.

I didn't really realise just how big the Fly team is, but yeah, pretty big! This is a cool edit of their whole crew riding the Worlds. Kevin K should've won the spine comp purely for dropping out the coping tyre slide thing, Taj style. I love those!

The controversial Mutant Bike company have another 'new idea' out, the peguard. Essentially, a peg with a built-in guard that appears to have a few flaws. The reasoning they give on the site such as "Hub guards are not simple to assemble and too large for its functionally" (Really? How?) and so on seems pretty debatable, and I'm fairly sure the lack of compatibility, limiting it's lifespan by having one point to grind on (Not the only peg like that, I know, but that doesn't make it good) and having a guard that could potentially bend upwards into the hub/spokes doesn't really count in it's favour either. I'm just still amazed that they're planning on releasing that frame with that seatpost setup (Apologies to the anonymous commenter who was unhappy I only listed 5 bad points with it, apparently that's not 'backing it up' enough)... 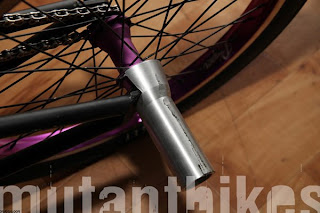 Don't get me wrong, some of their products are nice, but some of them just make no sense whatsoever.

RideUS are planning a follow-up to the awesomeness that was Insight, in the form of "Range Of Motion". To quote their release:
The Concept
Four riders who are well-rounded, able, and astounding on anything you put in front of them—Dennis Enarson, Tony Hamlin, Sergio Layos, and Dave Dillewaard.
Take those four riders on three trips focusing on each type of riding. Trip number one, a park trip up in the Great Northwest, has already gone down. A dirt trip up in Pennsylvania, New Jersey, and New York is going on at this very moment. And a street trip along the California coast will go down about a month from now.
Now add in four more shredders on each trip that specialize, if you will, in what we’ll be riding that trip. Drew Bezanson, Simon Tabron, Darin Read, and newbie Ryan Wert went up to Oregon to ride cement. Cory Nastazio, Adam Baker, Mike “Hucker” Clark, and Luke Parslow are with us right now in the Northeast. And Aaron Ross, Garrett Reynolds, Sean Sexton, and Rob Wise will be with us in Cali.

...and this is a video from their first trails trip. Serious business!

Retribution have their Owl T's available now, and also have this Saturday Shenanigans video up. Controversial! They say they got it from an "Undisclosed location" but I'm fairly certain I know who made that...

Tony Watkinson rode for 20 minutes after the Worlds, and Mike King documented.

Morgan Wade has something to say, to quote the title of Ride's old Chase Hawk interview.

Random one, but Ani- er, I mean "A. Bike Co." have some wax out. Street dawg approved? 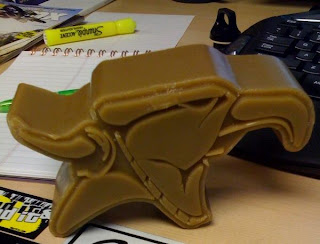 But for now, everyone needs to look below this post and check out again how insanely good those WTP completes are. My my!
Posted by Mark Westlake at 10:08 pm