Beast.
Posted by Mark Westlake at 8:45 pm No comments:

Apparently so. Something new and something old in the form of a Bangin' new Eric Lichtenberger video from Sunday, which potentially the most ridiculous pegless rail-related ender ever?

Eric L, Hold On! from SundayBikes.com

The 'old' is this awesome section from Brighton Ain't Ready featuring Sean Sexton and the not-used-enough TV On The Radio. "Desperate Youth, Bloodthirsty Babes" and "Dear Science" are well worth a listen if you're planning on broadening your musical spectrum. Vocal harmonies? Hell. Yeah.

Speaking of pegless enders too - not the first time this ender's been seen in a web edit (Ben Lewis got involved with one to name but one person), but it's serious business none-the-less. Some awesome little bits and pieces in the rest of the video too, but what else would you expect from the freshly Fit sponsored Farren Downes? The dude's rad...

Lastly - if you want to see the new Cosmotron V3 or part of the new Sect forks (wasn't that name taken already?), click those links.
Posted by Mark Westlake at 12:31 pm No comments:

Well, slightly more than that in that this is a "Tuesdays by Miles" video and it's a Friday. Still, it's pretty rad!

Kevin Kiraly is pretty handy when it comes to riding bicycles. As a direct result of that, he's now got a signature setup coming out on Verde which you can check out here.

Lastly, if you want to see Lloyd pulling a classic "I've eaten too much" face, go here. Calzones rule.

Have a good weekend...
Posted by Mark Westlake at 5:12 pm No comments:

Best believe - some good ones today! Saw the NorthOfTen video over on FFWD a few days ago but didn't check it out. Hit every other site in existence over the last day or so and finally got to check it out. First and last clips = worth watching for definite.

...and now for something completely different. This is from Dave King, and it's pretty nuts. Bit of dedication building wise, to put it mildly. Looks like fun though! Head on over to Derelict to view it.
Posted by Mark Westlake at 5:10 pm No comments:

More PrettyShady headcam footage, and some rad transfers. Tip of the hat to Deluxe who brought this to my attention!

I genuinely couldn't care less about this side of things, but if you're a fan of soap operas and like to translate that mindset to BMX, here's the continuing Ben Wallace/Amity saga, this time from Amity's p.o.v.: Boring link.

Lastly, here's a TJD video that may appeal to more people than that previous link.

Posted by Mark Westlake at 12:50 pm No comments:

These two videos dropped within the past 3 hours or so, and they're both ridiculously good. One from Mutiny and one from Stranger. The Stranger one is fully amazing. I've never heard of that guy before, and me and my housemate just watched that video and it's the first one I've seen where I've literally been saying "Oh my God" after seeing moves in it. Watch it now!


Posted by Mark Westlake at 9:11 pm No comments:

First thing that you, as the reader of this blog, need to do is go and check out Benson's portfolio site, then check out the BMX section and the photo of James Cox doing a suicide. When it first came out in print it was awesome, and this just reminded me how good it was. There's also plenty of other good stuff in there, apart from the photo of Jimmy Rushmore at Rom which made me want to claw my eyes out.

Dig have a couple of things up today that didn't really interest me but may interest you. Firstly, I don't run brakes so Fly cables don't really appear on my radar, and secondly a Scott Ditchburn video bikecheck with what you might describe as a flawed riding-to-talking ratio. Still, if you - like here - are being blessed with a cold, rainy evening as a vicious blow from Mother Nature to make up for the last week of sun and ridiculous warmth, it's something to do, eh?

Speaking of sun and warmth, this video of Josh Eilken is a glimpse of what might happen if we actually get a summer this year. That, and if you get rad on a freecoaster and learn flairs...

I've got to go and edit a video now, so it'll have to be toodle pip.
Posted by Mark Westlake at 5:13 pm No comments:

I can't think of a good one.

This video's getting posted here because even though it's a trailer for a web video, it features Adolfo, who many of you may already know or may sorta know from the Street Vs. Tweak jams of yesteryear, and also 'cos it features Modest Mouse. From FFWD.

FFWD also had this video of Lloyd up today, which is fairly ridiculous. Boy got skills.

Happened to check out the United site today too, and they've got a little post talking about Leo Forte's design site, which is here. I'm into art/design, so it was cool to see even though it contains a set of spiral stairs that I'm pretty sure would end my life, judging from my stair-walking-down success of late. Dead sailor...

I'd imagine that Leo Forte would probably be into this video as it features some trails - it's been pretty much everywhere already but that doesn't really lessen it's impact, in both a literal and figurative sense.

That video's by Pretty Shady who also posted up this video of great success on a different line. Those trails are beast, and wider-than-the-world Youtube embeds are pretty beast too. They've also given me a desire to watch the old Twenty vid of Alex Dropsy annihilating a set of trails filmed on a helmet cam, which is officially the (second) most ridiculous trails footage I've seen. So good, yet so hard to now find...

I wasn't particularly into this edit overall, but Caleb Quanbeck absolutely owns nose manuals, and in the hopes that watching it again might make me get even fractionally better at doing them I'm posting this. Monkey see, monkey do.

Very much lastly, 'cos it's officially riding time, here's an edit from Odyssey. Terry Adams makes his riding look as goofy as Aaron Ross's stance in this, but it's a fun video to watch and they both do some cool stuff, so give it a scope.

I haven't seen Tim in pretty much forever, so it was cool to see this amazing new video from him. That nozzer 180 up the SB block is officially where it's at, what a hero!

In related news, this DUB video is also where it's at.

Posted by Mark Westlake at 5:07 pm No comments:

My home connection is terrible, so I'm using this brief respite in Wales to post up some cool stuff.

Albert Mercado is one of my favourite riders to watch. Awesome style, creative, just great to see. This was up on Dig:

Mutiny have posted up two cool vids - one of Mat Roe getting rad, and the other of George Boyd doing a cool rail trick, then a not-so-cool knee destroying trick.

I quite like Stranger's site, and they've also got an interesting 'sponsor me' thing on the go. Bit different to the norm...

I haven't really been interested in the 'industry' side of things much at all lately, but Rob-O has an interview up on ESPN which is quite informative.

Yeah, so it seems every time I say "Will update more", I leave it about a month? Unintentional unfortunately, but the real world got massively in the way for a fair time. Anyways, Pete Greaves and a trip to Newcastle made me realise what I was missing, and here's a video of Pete pointing out how he does things up there. So good. (That video was from Streetphire, but I've already linked to them once in the past paragraph so I'm not going to do it again. Sorry...)

Another awesome video, this one that I saw over on TheComeUp, was this beast. Pretty burly stuff, always good to see.

The ironic link between the two of those videos is Pete's call to vote, and the Conservative ad I just saw on the TheComeUp too. Comedy.

This is old but still good:

Something new that is also good is the Animal Cuts DVD that is really, really good. Go to the premiere, check it out, buy a copy, be amazed. An hour of bangers, and a bunch of people falling over on ice. Treats.

I've got eat some paella, edit my friend's video and get the hell ouuuutta here so that'll be all for now. I'd make some bold claim about frequency of updates, but... well... I've said all I need to say about that.
Posted by Mark Westlake at 5:09 pm No comments: 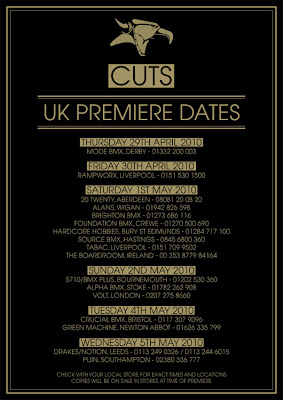 We will be hosting the premiere of the Animal Cuts DVD at the Orange Rooms in Southampton. So head down to watch some stunts and down some beers. We'll have copies to sell on the night too, so just find Carlos on the night and give him 1,299 pennies.