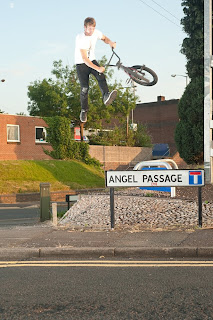 Pic via Homer via The Make.

Robin Fenlon (Namedrop?) sent me a message to say that not only were Vinnie and Jason victims of frame death, but Orchid's newest rider Mr. Shaun "Finally got sponsored" Hadlington snapped his frame at NASS too. People need to start making stronger stuff again! Like Chris Harrison said in his interview with Mark Noble:

"I honestly think that at the moment, anything below four and a half pounds is a bit ridiculous for what is being marketed as a street frame or even a semi-robust frame for everyday usage. Maybe frames will become disposable like skateboards where people only expect them to last a few months before switching it up for the latest thing? I certainly hope not though. The consumer is to blame in a sense, as they are ultimately demanding lighter parts, and then companies obviously answer this demand and end up producing three and a half pound frames that are not fit for purpose. I think as an industry we have a responsibility by the rider to educate them and to make sure they are aware of the limitations of frame design. It's better than letting a consumer buy a badly designed frame and have them find out the hard way through personal injury."
Posted by Mark Westlake at 2:58 pm