Just throwing this out there, but Frijj chocolate brownie milk shake + a mug + a microwave + 2mins or so = tasty beverage. That is all.

As mentioned previously, wah wah wah I'm busy wah wah wah - I know I keep saying it, but it's true dammit! As a result of that, here are some now slightly 'dated' videos in this 50-edits-a-day BMX culture, but are still pretty amazing anyway.

Pete Sawyer now rides for WTP as well as the usual 'fun', and this is a video of him made by Will Evans. Syntax failure there. I only ever post good videos (Fact!), so I don't really need to point out that this one's a bit of a belter, but I will anyway: This video's a bit of a belter.

In very much related belting news, it's not often you get people capable of throwing down moves on street, dirt and park. I know some people make a big deal out of 'being an all-rounder' and 'being able to ride anything in front of you' and all that, but after spending a surprisingly hectic Thursday trying to not punch out snaking scum at Corby, I'm fully not fussed about being able to do styley footjam variations on quarters. However, Georgy Doremus, who rides for Subrosa, has obviously not let some snaking kids put him off (I guess being a bit of a meathead helps in that sense?) riding park pretty well, not to mention street and a big ol' dirt ender. "Big ol' dirt ender" sort of came out wrong there, but hey ho.

Speaking of dirt, I hear that part of being allowed to dig trails is being able to talk at length about how dirt is the root of BMX - well, sort of, but here's the more accurate root, a bit of Bicycle Motocross Racing courtesy of Clicked. The tags on there lead me to believe he's clipped in, which to me just screams out 'karma'. It's pretty amazing how long he holds that body position for. Having dead sailored jumps that were minor compared to that I know how rubbish that 'Time slowing down/This is going to cane' feeling is, so multiply that by a million and that must be along the lines of how that one felt.

Hey! You know what's really not interesting at all? Sponsorship news: That's what. That's precisely why this is all you're getting from me about how two big name riders are now going to be given free shoes by alternative companies while suckers like you and me have to pay for the privilege of not tearing our feet apart on pedal pins.

I was all set to end on that note (partly prompted by the fact my TKMaxx specials are all but dead after 3 months of service), then a quick website lap reminded me I'd entirely forgotten to post the Shadow roadtrip. The riding is as good as the weather looks in this.

EDIT: Late addition again was this edit from The Kink House featuring some gentlemen lying down.

Still weirds me out seeing Lloyd in videos like this...
Posted by Mark Westlake at 10:41 pm No comments:

Bleurgh. Long days in work = less time to update: Apologies all round. A quick lunch-time update:

WTP's new parts are now live on their site. Go check 'em out, they're sweet!

Subrosa have a video up on Defgrip to go along with their Disposed feature on there. Every time I saw Miles Rogoish ride I was half expecting to see an E.T. in every clip, but there's a few less in this video than recently. Some cool riding in it!

This was posted by Paolo over on the Dig site. Paolo pretty much always posts cool, interesting stuff and this is no exception. Gotta be a pretty sweet job doing this sort of thing!

Posted by Mark Westlake at 12:47 pm No comments:

Spotted this today too, from Bertie Buck. Some cool lines in this, and some rad filming...

Posted by Mark Westlake at 8:20 pm No comments:

Some thanks are owed to a couple of websites for the awesome videos you're about to behold - Stranger for the Craig Passero "You really need to watch this now" edit, Osiris for the Miles Rogoish "Marmite ETs" edit, and BMXUnion for putting up this interview with Lloyd Wright and also posting up an old Dig edit featuring him and some of the rest of the Kink team. Muy bueno!

Bonus points go to whoever can work out which rider's catchphrase the title of this post is - hint: featured in this post...
Posted by Mark Westlake at 8:14 pm No comments:

The new Radio Bikes brand was created by the guys at Wethepeople to cater for the entry level end of the market. Having already signed Morgan Wade to head the team, they've also just recruited Dean Cueson...

Posted by Unknown at 8:18 pm No comments:

Lloyd is getting even better. Some serious bidnaz from over at TheKinkHouse.

In related "People I know from London who're really good" video news, Billy from Brixton is rad. X-ride to twizzler was dynamite. <- Went there.

I made mention of that Eastpak edit that Stefan Lantschner did a day or two ago - this is a new edit of Simone Barracco for Shadow that Stefan's filmed and edited. Really feeling it. Some cool lines, nice views, nice angles and generally good vibes. Kid's got skilled.

Danger's now on TheTrip, and this is his intro video. That beasty three near the end of the video - my my...

Lastly, I sorta liked this video but was a bit here nor there - however, I'm posting it for the perfect 540 air. I mean really, outside of Jamie Bestwick and a vert ramp, they don't get much better than that.

Posted by Mark Westlake at 12:42 pm No comments:

Remember a while back I said:

"A while back BMX photographers started getting sort of replaced by just 'people with a camera', and it seems Vans are stepping it up with the new Let It Ride video "Bro cam project". I don't know if there's a seperate 'proper' video to go with this, but I'd certainly hope so. If not, maybe we should progress this whole idea along and stop frame designers and product engineers from doing new products, and just get people who can draw a semi-accurate picture of a BMX part to design them? I mean, you know, all it really is is drawing stuff, right?"

Well, here's an Eastpak video that's a bit old now but I hadn't seen 'til now.

Posted by Mark Westlake at 10:21 pm No comments:

To quote the Pixies, 'Where is my mind?'

Hopefully sleep will make things make sense. We'll see. Those videos are good though, I'm aware of that even though I wasn't aware of how to manoeuvre a car earlier.
Posted by Mark Westlake at 10:11 pm No comments:

Posted by Mark Westlake at 12:48 pm No comments:

Posted by Mark Westlake at 11:48 am No comments:

This is really, really good, and I'm now going to bed. TheMake are doing it right.

Go and check out the Make site now, some awesome stuff on there. I don't think you'd find "Jeff has decided to leave to go and ride for Eastern…. Maybe Eastern is a lot cooler in America than it is in England!" on any other company's website...
Posted by Mark Westlake at 1:09 am No comments:

Dan Lacey is serious. From Federal.

Posted by Mark Westlake at 5:50 pm No comments:

End of an era?

Might be reading into this a little, but is Banners leaving the editors role at Ride? 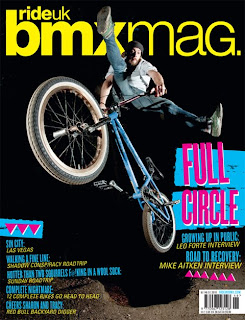 Lastly, Vocal is the latest parts company to spring up from a distro, this time from Scoop. Product info on their site...
Posted by Mark Westlake at 5:46 pm No comments:

Millsy has a pretty rad video part up from Federal, who have also put up a rad Barcelona video too. Some awesome riding in both of these. Great vibe, and really makes me want to be riding somewhere warmer tonight...

Following up on the awesome vibes shenanigans is Ben Hucke, who's had this fun little edit go up online.

Lastly, any Ben Hittle video is a good thing in my book, even when it's from an older DVD part (in this case, TheComeUp DVD).

Posted by Mark Westlake at 5:10 pm No comments:

Well, missed out 2 days of posting stuff and totally forgot everything I wanted to post. Failing.

This is the end of the Sun-Ringle roadtrip footage milk-a-thon that's been going on. Pretty good stuff in there.

FBM are also purveyors of good stuff, and to celebrate the launch of Anthem II they've launched a Ltd. Ed. frame. Click here for more.

United's roadtrip video from Canada is also pretty much out - here's the trailer for that.

Lastly, HoleShot 8 is out - more info on that here!
Posted by Mark Westlake at 12:56 pm No comments:

Well, this ought to be good?

Think I forgot to post this before, but the Red Bull Trick or Treat jam looked pretty cool:

For some quality pigeon handling technique, check out this video of Mutiny's Continental version of Brazel (in-joke), Rubio.

Oh yeah - another Red Bull edit I just remembered about (and should probably put up by the other Red Bull comp edit above? Meh) - the Most Wanted comp from Austin. The BMX boards are lit up with talk of Kevin Porter doing a line someone else couldn't do - it's a comp, handle it. You don't ride comps to have a relaxing, fun time - that's what actual riding is for (seeing as KP split the money with the other guy anyway, it really isn't important).

Posted by Mark Westlake at 12:29 pm No comments:

Posted by Mark Westlake at 12:45 pm No comments: