That's pretty much the harshest ball-ride out I can imagine (You'll see the one I mean). I mean, he bounces off it, twice? No thanks, no thanks... Anyways, plenty of good riding all up in that piece, so check out that trailer then check out the DVD when that drops. FBM!

This is all just ticking down to the point where the Randy Brown ender section gets put up, but still - Garret's section ain't bad either:

This means nothing to the majority of people, but that player has the neatest embed code I've ever seen, haha.

Fit posted this up on their site.

Also up on the Fit site was the "Scraping the barrel this week" Stay Fit 3 video. 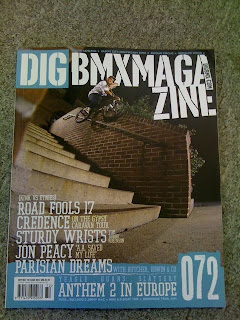 Defgrip have a rad video up of Matty Long - watch it here.

The BMXFU video's been getting slowly uploaded by Charlie Crumlish for the past few days/week. I watched this video around a friend's house, and man, it is long. I don't mean that in a good way either - it's probably one of the longest BMX DVDs I've seen in recent times. The 'skip' button got rinsed fairly heavily, so I can't really remember in my head which sections were good and which weren't. In any case, if you particularly want to check the rest out, click here.

Despite being reasonably anti-park on a personal level, I still really like watching Harry Main ride. He's certainly pounding out the footjam variations these days, but that's not all he does in fairness to him. Jeremiah Smith also has some line-age in here too.

The first thing I thought when that pre-roll came on was "Oh, MirraCo. One day you'll understand."

I originally saw this listed in the Streetphire video feed, then clocked it "4 reelz" on the WTP. Just get that bit of house-keeping out the way, now here's the video:

Actually, it's not. Vimeo has just fully died for me, for some reason. I hate you, Internet Explorer, but not as much as I hate how the newest Firefox has ruined my laptop! Click here to see the vid.
Posted by Mark Westlake at 12:54 am