Ok, so I posted the "Carlos vs Slosh" intable blog a few weeks back... For those of you who haven't figured it out yet (believe me, there are people out there who haven't figured it out!!!), Slosh is the only one doing the "intable". Carlos' picture was just messing about. He'd flipped a picture upsidedown of himself doing a table! So despite what some of you think, there is no serious rivalry, just a bit of fun!

Anyways, it seems like Amazingstoke local Craig has them properly dialled too... 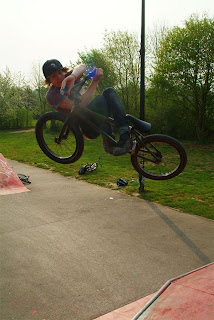 On the subject of BlazingSmoke, Bruza has started a new T-shirt company called "Authentic". Tees are looking pretty good and the first batch has sold out! Check out www.myspace.com/authenticbmx. I'm sure if you ask Bruza nicely, he will sell you one of his nice T-Shirts! And Pijin has 2 left to sell too...

Here's a little vid of a Bruza attempt at a tailwhip over a massive gap... Make sure you have your volume turned up for the massive bang at the end!

If Bruza won't give you a Tee, then you could try fellow Tadley BMX clothing company Pointless. Hank has a nice new online shop where his designs are available in a miriad of colours, and all for a tenner too! - www.pointtless.co.uk.

Southampton's very own Chris Doyle Matt Vokes has taken over Medical Clothing... and has some new designs being printed off as we speak... I think this time round, he's printing off the "small" tees for all the fashion kids out there...

And finally, can anybody tell me what the "CFC" prefix means???! [Check Basingstoke MySpacers...]

CFCs are widely used as coolants in refrigeration and air conditioners, as solvents in cleaners, particularly for electronic circuit boards, as a blowing agents in the production of foam (for example fire extinguishers), and as propellants in aerosols. Indeed, much of the modern lifestyle of the second half of the 20th century had been made possible by the use of CFCs.

Man-made CFCs however, are the main cause of stratospheric ozone depletion. CFCs have a lifetime in the atmosphere of about 20 to 100 years, and consequently one free chlorine atom from a CFC molecule can do a lot of damage, destroying ozone molecules for a long time. Although emissions of CFCs around the developed world have largely ceased due to international control agreements, the damage to the stratospheric ozone layer will continue well into the 21st century.