Bike theft - keep an eye out!

Little Joel's lovely baby blue Superstar Parkinson got stolen today, when Joel basically got mugged at Shirley Warren skatepark at about 3:30pm. The police were called but did a no-show, and didn't even go to Joel's house later on. 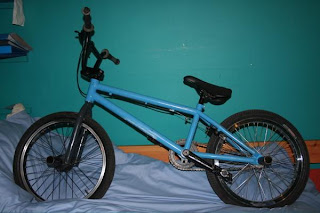 Bear in mind it may not have the same colour 'n' stuff, but Parkinsons are pretty distinctive (D-shape cross-section chainstays, integrated seatclamp, machined BB shell, etc.) so even if it's got pikie paint all over it you'll be able to spot it from a mile off.

Anyway, if everyone could keep an eye out for it that'd be great. If you see anything, either let one of the guys in Pijin know about it or drop Joel a message at Joel's Myspace or on his MSN - joel_carr[at]hotmail[dot]com, or e-mail me at Mark[at]Style43[dot]com.
Posted by Mark Westlake at 10:08 pm