Well, it looks like Mutiny are making another frame I want? Second time it's been a Josh Bedford signature frame too... 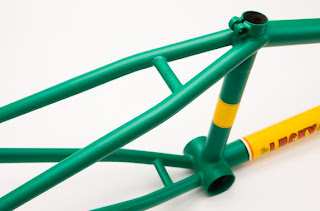 Due out in October, by which time I'll hopefully have a job again and be able to afford such luxuries. Tempter.

In other "NEW PRODUCT" news, a 30 second video about bolts?

To be honest, speaking as a generally pegless rider, I'd rather have a bit more bolt to aim for for grinds 'n' stuff, but then again I do 'em weird.

And... uh... well, that's it. Dave Gorman, incidentally, is ridiculously good live, as I had the luck to find out tonight. Too good. I imagine the tickets have all sold out, but if you're near one of the venues for his latest tour, beg, borrow or steal to get there. It even involves bikes!
Posted by Mark Westlake at 12:25 am