Mark Noble is continuing to put up cool stuff on ESPN, showing again why he helped steer Ride so well for such a long time. In this article he has a pretty interesting interview/talk with Chris Harrison, product designer for Federal. Well worth a read!

In semi-related news, Ride have a video up on their site from the Corby sessions that took place while they got the content together for the latest Role Models issue. Seems to have been a controversial issue, but people talking is better than people keeping quiet. Being made to think about things is good...

There must've been some hectic friction burns for Jason Phelan.

In that interview issue of Ride, the long overdue Josh Bedford interview is featured as a full interview. He pulls some pretty crazy lines for it, has an interesting story to tell, and seems to generally have something worth saying. Anyways - key thing is that after KO'ing his collar bone, he's now back riding and testing a signature frame, according to Mutiny, which is where I grabbed this pic from.

Whilst we're talking about interesting, different individuals, Ian Schwartz - who's been pretty under the radar of late - has a bikecheck up on RideUS's site, which is where this tech little widget is from:

Actually, that's a lie - I just went to copy the embed code and they've disabled it, so you've got to go here to check that out. BONUS! Ian also has a few things to say on the Sunday site, including some stuff about new shoes, new spots and new Lotek videos. Apparently Rich Hirsch has remembered he's made some of the best videos around, and is going to do more. Good times!

Probably should've put this earlier, but ESPN have a new video up of Brian Hunt that seems fairly similar to one I've posted before, but I'm fairly sure isn't the same one...

You be the judge?


Speaking of hectic, Proper have a new stem coming out in their disappointingly non-flight enabled Microlite range:

Here's the details straight from Bikeguide, which therefore might mean they're not actually true:

Specs:
- 6061 T-6
- 52mm reach
- 249g (8.78 oz)
- Recess allowing for the fork compression bolt to sink flush for a clean look.
- Rounded back that stays out of the way of your knees.
- Internally relieved and slotted top to bottom (stronger than side to side).
- Additional clamping area for slip-free bars.

S&M have a new shorter Redneck XLT coming out, and a new Randy Brown frame, but their site is so abhorrent that I'm not even going to link to it. Just imagine a slightly refined, stubbier Redneck, and a fancier Fit Dehart frame. Hey presto!

In semi-local scene news, Tom Chilvers, who some of you dudes at Pijin will know, fully mangled his ankle tonight: 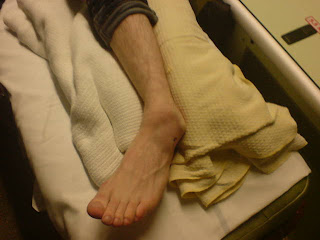 Whips: Fully not worth it. But seriously dude, get well soon!

"Myspace" Dan has upped and left the UK now, having left Southampton a week or two ago. It's actually his birthday today/yesterday (3rd March), which he spent somewhere in Cambodia - happy birthday Dan!
Posted by Mark Westlake at 1:24 am