From the moment I got the e-mail from John a few days before the Nike Tunnel session to driving back home at midnight on the Sunday, that "Chuckle Vision" theme tune overlaid with "Tunnel Vision" was pretty much all I could think about.

The basic premise for the whole gig was that a bunch of shops - including Pijin - were asked to head over to the Nike Tunnel (as seen in the Tunnel Jam vids/pics/articles) to film some riding and generally have a rad time. While the Pijin edit's not going to set the world on fire - primarily because no filming went down - the "have a rad time" aspect of things was certainly covered. 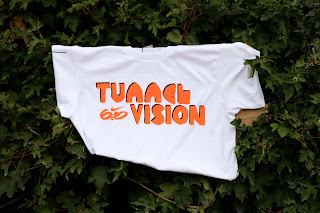 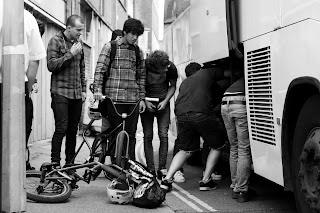 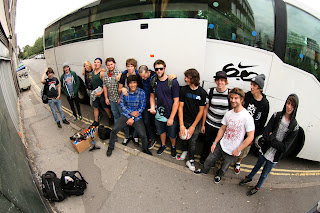 Nike know what they're doing when it comes to putting events on. This was the third Nike-sponsored event I've been to, and that also meant I received the third free event-specific T-shirt from them. Yeah yeah, T-shirts are T-shirts, but the free food, drink, grips, transport and riding session were also signs that Nike are more than happy to spend their money ensuring people have a good time. I'm well aware that in the past there were issues raised with Nike's manufacturing ethics, but bear in mind that times change and they really do invest in BMX rather than just squeezing money out of it. People often complain when 'corporations' get involved with BMX and people see it as purely a money thing, and even though this could be construed as a cynical ploy to get us media types all singing Nike's praises they're still out there putting their money where their mouth is. Paying local unemployed riders to build a skatepark (that Nike are also paying to maintain) is a pretty cool thing to do - rather than just paying people to come from further afield specifically to build it then do one - as is allowing people like the Pijin family and friends to go and have an awesome time there, all for free. 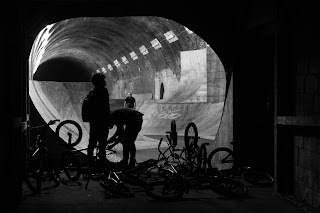 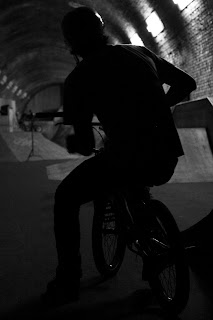 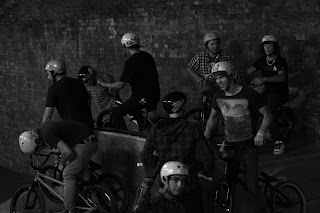 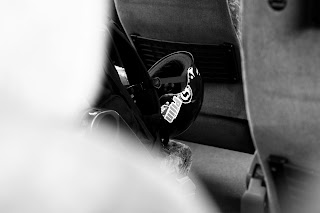 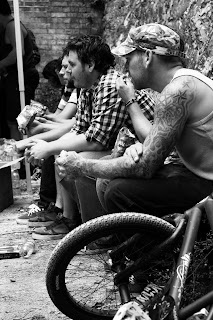 Anyway, that aside - the Tunnel. The vast majority of us hadn't actually been to the Tunnel before, so for all of us it was a new experience rumbling down narrow country lanes in a massive coach before having to get out ("I'm supposed to stay on site all day." "You won't make it down there." "But I have to be on site!") and riding down some bumpy road to get to the tunnel itself. When you first go into it, the first thing you notice is how cold it feels. According to Carlos, it stays at about 11°C or so pretty much all the time because of how insulated it is. Walking through some massive metal doors, past the rowdy generators, past the mini then down a narrow, pitch black path with the ramps all lit up ahead of you was a surreal experience. While everyone was filling out their "I'm not an idiot and won't sue you guys" disclaimers out, I snuck in before everyone else. Getting into the ramp room was ridiculous. The ramps aren't small by any means, so just seeing a sort of wooden snake run built into a long tunnel that just seemed to disappear into the distance was out of hand. The few times that the generator died and plunged the tunnel into darkness highlighted how mysterious the place was, and the way that even with the lights on if you walked behind the end ramps and just looked down the tunnel it just disappeared in a murky blackness was pretty spooky. Hearing Ben talking about Peugeot 205s, original VW Beetles, The Sun shoots and all the other crazy things that have gone down there also helped lend it a certain mystique. 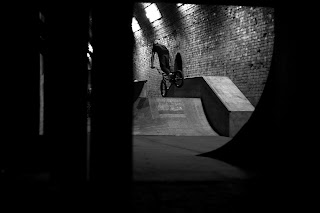 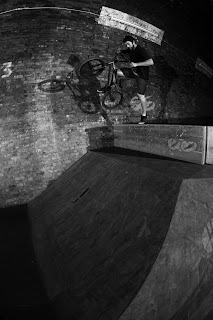 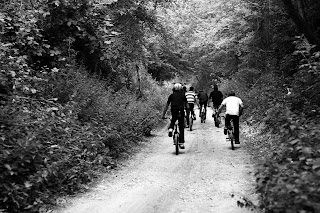 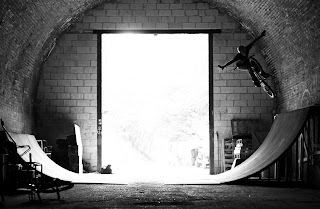 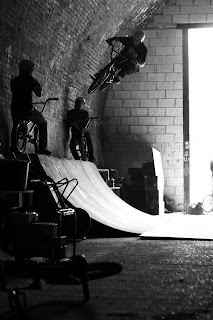 Seeing people's faces when they got into the tunnel was priceless. Even the more street guys there were more than keen to have a session, and it was cool to see everyone throwing down the moves. There were a few riders there who I hadn't really seen ride in a year or more, and the improvement and progression in that time was nuts. The "You might as well try it because you won't get to ride here again and it'll just annoy you" attitude certainly helped get a few moves done - Antonio waiting 'til the dying seconds of our time there to drop the 3 off the top of the sub-box setup to flat for one, as well as guilt-tripping Joel into wallriding it all down to flat. In case you were wondering, no matter how many times you see someone carve over the top of the doorway to the ramps, it never gets any less scary to watch. Everyone there did something cool at some point, so me not necessarily commemorating it in either photographic or text form isn't a slight in any way. If you were there, you know what you did and I know what you did, and that's the main thing... 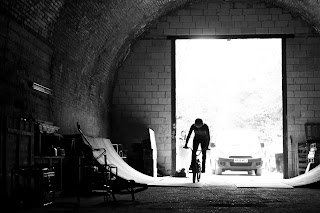 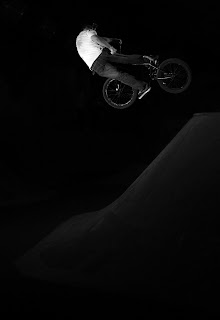 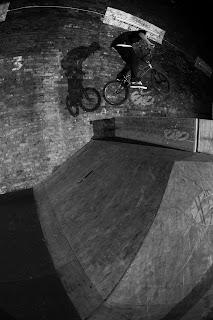 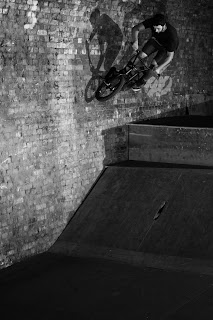 Late nights after a long day at work and a load of riding never really make me write in the most coherent way so I'm going to draw this mess to a close. Huge thanks have to go out to Sam from Nike, Paramedic Daves, Ben for opening the place up for us and telling us some pretty crazy stories about the tunnel and John/Pijin for helping out with everything else. Big thanks from me, Joel and Butlin to John for letting us stay in the shop the night before too - Guitar Hero, Bomberman, pizza and Oragina - 'nuff said. In the current age of online bitterness, petty bickering and the other distractions in the BMX world, it's still cool to know that there are people out there trying to make things better, and trying to get riders hyped on riding again. Everyone left the tunnel pretty spent after giving it all day, but even though the bus was pretty quiet on the way home you could still tell that everyone was buzzing from it, and that's pretty much what it's all about.
Posted by Mark Westlake at 11:09 pm

Just asking, i know where this is, i live pretty near, is there anyway that i can get in or come down with you guys some time even just to watch? Always love watching people at what they do best. Looks like a cool (no pun intended) place to be and would love to check it out.

Not too sure, sorry! We got invited down by Nike, so it's not really regular for us. Maybe track down some of the locals?