4Down Summer of Madness Review 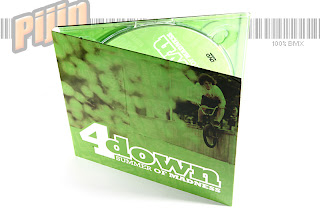 Having been lucky enough to have an opportunity to check out a rough draft on Summer of Madness at James Cox's house, I sort of knew what to expect from the finished product, but I was still excited to see how it would turn out. Having been with the Fit team on their London leg of their tour, I was also interested to see how the ridiculousness of what they got up to would translate onto the video.

You know how much effort has gone into a video when even the menu select screen looks cool and has a little video featurette that you actually want to watch. The actual video itself though kicks of with a little edit of Boyley, which I thought was quite a nice touch. It's almost reminiscent of how Animal drop in clips of Tiseo, but in this case it's all the more relevant as Boyley's riding is still good even though it's a few years old.

After that tribute is a random montage of clips of crashes, people kicking back in a session and some of the general randomness that happens out on the road. This smoothly switches into a nice little cut of riding from various people on the DVD to give you a bit more of a feel of who's doing what. You also get to see Owain Clegg's ACL get marmalised - not cool!

The first actual section of the video is devoted to the S&M team's trip. Kicking off with a ridiculously held ice to tap by Donnacha Carroll, there's a good mix of riding here from the flow of Lima (Although he's got more than just "Flow" in his trick-bag; the 180 up a block to half-cab off to manual-180 off the end of the ledge he started from was tech, and smooth as hell), to the street-ness of James Newrick, to the old school/new school mix of Amos Burke to Joe Fox's generally high levels of awesomeness (culminating with a table down a whole load of stairs).

All the riders on this section earn their keep, especially editor James Cox, who was on a strict "No filming!" regime by Dean Hearne to make sure he got clips going into the vid. And clips he did - you do one, he'll do it double. This includes double barspins on banks and even off a ledge (I think? So fast!) to double footjamwhips that look mental. I don't get how you can take your foot off your front wheel with it pointing straight down a bank, and not have it move? Either way, James gets it done.

The section flows nicely, with a good pick of music and a choice selection of bangers. The filler:killer ratio is spot-on too, with the mixing of general roadtrip vibe stuff tying in nicely with all the general riding that goes on. The S&M trip draws to a close nicely with a good-sized banger from Donnacha - I was amazed he didn't die, one inch forward would've been brutal. I'll say no more!

After that section, it goes over to the Rebel Jam trip that features most of the UK FBM team with a mix of some of the Metal team too. This means you get another variety of riders, with the whole spectrum of riding covered from Tom Blyth's rail killing and general street tech to Josh Elkington flowing round parks pretty much smoother than anyone else can. There's another dose of the old school here courtesy of Fids, which mixes with the newer style of Ross Tanner and Co. well. Steve Crandall and Ryan Metro make it over from across the pond too.

The riding is generally good in this section, although compared to the trick-fest of the following Fit section and the previous S&M section, it seems a bit empty at times. That's not to say that there's a shortage of amazing, stand-out tricks (Tom Blyth's opening G-turn over a pretty long jumpbox, and the manual-tap-to-360-off on a concrete block being prime examples), but it's not as relentless as the other sections. There's still a good amount of riding to be had in there though, and the editing again holds the section together well. Caleb Kilby seems a little more in control these days, and as a direct result is now fully dominating whatever people put in front of him. One of the highlight clips is probably a ridiculous gap to manual (I think there was contact anyway?), which is promptly followed by a "F**k!" from trip photog Steve Bancroft. Timing.

After that section's done, there's a small Fit section from Scott Edgworth dominating some dirt. This section screams "Summer!" as loudly as it can, with clear blue skies and a bright, sunny look to all the clips. It's a really light section, with some pretty heavy riding. Ever since seeing his section in No Front Teeth I've liked his riding, so it was cool to get a more up to date dose, even if it did give me some pretty big summer withdrawal symptoms.

After we wave goodbye to the sun in Scott's section, we get to say hello to the at-times rain-filled Fit UK section.

The Fit section kicks off with potentially the most chilled person I've ever met, Scotty Ditchburn. In the interview on Ride's site a while back, James Cox mentioned about how Ben Lewis and Scotty D were on a producing mission (as evidenced by them both getting at least two clips at a soaking wet St.Pauls just to make up the numbers), and Scotty's pretty much got himself a full rider section in the Fit section. There's a different vibe to the Fit sections from the rest of the video, although there's still the roadtrip footage, it's got a much more focussed feel, which I'd say pretty well matched just how on it the team was. Still up for having a laugh, but tempering that with a desire to ride their bikes properly. Scotty does a ridiculous amount of amazing stuff in his section so I won't trick list, but yeah, hammers!

Cleggy and Owain Clegg have a split-section of sorts next, with some tech riding and lines from Cleggy, then some Cantelowes shredding and misc. London footage from Owain. Some of Clegg's spinning lines in this section just don't make sense. At all.

London-transplants Marv and Benson have the next split-section, with some tech grind lines from each of them, and some looooong manual-lines from Benson.

Last up is Ben Lewis (use this knowledge!). Ben's riding was pretty ridiculous when he was in London, and this trend continued throughout the trip. Despite being one of the quietest people when everyone was riding, to use the cliche, his riding did the talking. For example, his banger-line was filmed at a sports court in Hackney, and in between attempts he just sat there, looking at the floor. All of a sudden he'd get up, pedal as hard as he could, then just try it. Pretty amazing, even if it must've been stressing filmers Dean and Ben out when they got no notice that the trick was about to go down.

Similarly to Scotty, Ben has pretty much a full video-part in this section. It's fully justified, and there's a big mix of riding from Ben, from super-tech manual-to-gap-to-nose-manual-180 lines, to tech grind combos to a manual-to-180 that's so big it actually offended me. Just you watch the vid. You'll see what I mean. The only downside for Ben's section for me was the lack of bump stuff he was doing (If you saw the webvids that popped up online during the trip, you couldn't help but be impressed by them), but having had them rinsed online beforehand I guess they may have lost their use-ability in the final cut. His section is still a great ender to the video though, and it's a treat to watch.

The credits section is filled with the mandatory messing around clips, and failed lines, and is backed by some Ian Morris approved music. It's a nice way to wind down after the hectic last Fit section though, and again lets you realise just how cool a summer it must've been for Dean & Co., despite the stresses of getting almost an entire trip rained off (S&M) to having to battle to get footage of people (4down random team mix), to getting kicked out of literally every spot for an entire 8 hours (Fit London leg, day 3).

As well as the main video though, there's a couple of nice bonus extras - the Unused Footage montage is a cool little edit, and the 4Down comp edits are pretty rad too. There's also an... "Interesting" Amos Burke Cribs section, but you'll have to purchase the vid for that 'cos there's no way people would put that online...

All-in-all, this is a really, really good DVD. Considering how hard it is getting the clips on a roadtrip (when you've got your riding time split up by travelling, bad weather, spot-finding, chilling, etc.), James has done an excellent job of piecing together a video that really shows just how good all the riders are, whilst still getting across a great roadtrip vibe. It's not a full-on banger-fest, but it's still a great video to watch none-the-less. It certainly gets you thinking of long summer days instead of short, dark, wet wintery rubbish, and gives you motivation to want to ride so you'll be in top form for the sunny days that the good ol' British summertime should provide for us in 2008 - let's face it, it owes us one...
Posted by Mark Westlake at 8:18 pm