Somehow, judging at major comps just got legit - Mike Aitken won the Dew Tour's dirt comp last night. 360 cancan tyre grabs & Nac-nac to lookback vs. Double flips and Flipwhips. Good to see the judges get the point, unless this is just a plan to try and get actual BMXers interested in the Dew setup rather than just people watching the Extreme Channel? It's rad either way, seeing 'actual' riders get a decent amount of money and a share of the spotlight instead of trick ferrets is pretty sweet.

Eclat have released this pic of their new seat/seatpost combo, the Complex seat: 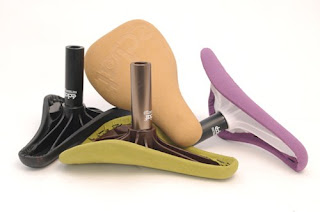 We've been working on this for a while now and did not want to release it until all of the kinks were worked out. Introducing the éclat Complex seat and seatpost combo. The Complex seat and post combo is constructed of a one-piece plastic core which forms the seat and post. Surrounded by the plastic core on the post is an alloy sleeve which insures that the post is not crushed when you clamp it down in the frame. Designed exclusively by éclat, the complex seat and post combo is available in two options, regular and padded, along with an assortment of colors. The design is patent pending, the seat molding is reinforced and you'll be able to knock a few extra ounces off your bike. And of course, if the Complex seat/post combo isn't your thing, you can always take precious time away from riding to blog about it... éclat will be at Interbike. Stop by the booth (#5367) and say hi.

Hopefully they'll release a pic of it on a bike soon to get an idea of what angle it sits at. Seeing as you aren't gonna be adjusting it, I'd have thought it was pretty important...