well EOD was rained off but im sure you all already know that. a pretty rad party went down thou on the fri night. all provided by red bull. it was a blast.

we had a pre-EOD bash at bar end trails on thurs eve. chill sesh and a BBQ. here's a random pic of that 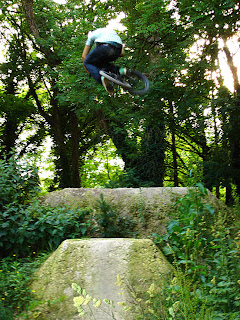 ermm, although EOD was cancelled, kye's trails (decoy) were dry enough to ride. all the pro's hit up that place, BF, darin read, doyle, all the big shots. it was sweet. i took some snaps so wen i get the films back later on in the week ill post one or two.
all ill say is brain foster, one handed 360 tables and a jump nearing a good 25-26ft long......

oh yeah also...... prior to the rains which fvcked the event, gary young made it all the way through the course on his very first run. INSANE. just wait till you see pics and videos of the course i guess

who is bonedave? he sounds rude...