ermmmm, trying to think of stuff to say that hasnt been said already........ news wise....

i guess empire of dirt is this weekend, super strong attendance. stew johnson is over filming it for props so all can see it, he was in london over the weekend with bicycle union's john dye. go peep that site. its good! www.bicycleunion.com
john has one of the best spots going in the uk, dubbed 'the spot'. i hit it up over the weekend and all i can say is WOW. hips and quarters galore!

erhhh, i dunno what else, ashley charles will be back on his bike any day now and his signature bars, unfortunatly not called ' the prince charles bar', will be out in a month or so. i belive they're called the lock stock bar.
here is a pic of ash i shot earlier on in the year.... 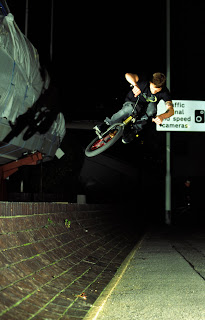 ermm, dead end bike Co. might be blowing up soon, clothing line shortley with help from square one..... head tubes for frames coming from solid....... stems and bars or something in production. could be good. they just hooked up lima's riding buddy 'pipe' up which is neat.

time for another pic? 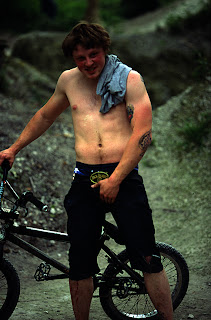 this is everyones favourite short stocky bastard wickham will. here he is actin 'a' fool at bar end.

it turns out no one in southampton actually rides bikes any more, myself and castle rode hoglands once or twice last week with no sign of anyone else......... thurs was cool, one or two others there, didnt get there names though so there we go.
spekaing of castle and myself, we are of fto america in just over 2 weeks, new york, philadelphia and pittsburgh, for a month. so expect a killa update upon my return, if not the odd one or two whilst im out there. should be goood.

cant think what else is new either!
ermm, there is a street jam and video premiere going down in leeds on sat 23rd june that cleggy of attilla is sorting. should be good. there is also a trails jam in leeds that weekend but thats top secret unless you're in the know. i however, am working all weekend so shall not be attending either. LIVID! 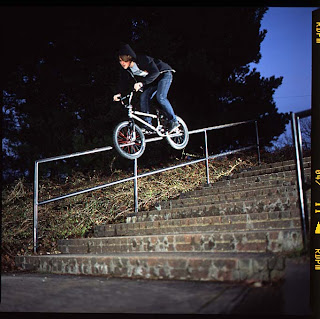 wickham will again, random rail in chandlers ford back in march i think.

runing out of things to say seriosuly now. go have fun. drink lots or whatver. i know slosh will be sluggin 'em back!

Do you live in netley marsh?
BD

Dan was in Rome, Joel's had his bike nicked, and other Joel's left. That covers 3 of the usual suspects in Southampton...

Joel's moved, Little Joel's had his bike nicked, and Dan's been in Rome, so that's 3 locals covered!

that rails in chandlers ford near the big old asda......