The long-awaited new frame from Fly, the Tierra (Kevin Porter's sig. frame and parts), has finally reached the production stage. Distros in the far East have got their hands on them already, meaning that those of us further west should get them soon enough. With pretty "Out there" geometry such as a 13.25" back end and a 75deg head angle, coupled with the smallest dropouts and seat-tube on any frame around at the moment, the Tierra is sure to court controversy when it hits our shores.

If you've seen the Empire DVD (And you should've done...), you'll have seen both Dylan Smith and KP riding their's, so you can get an idea of what they'll look like.

The toptubes are supposed to be 21", 20.6" and 20.1" (or 19.8", depending on who you believe...), and prices are tentatively set at around £199.99 according to online gossip, but wait for some concrete facts on those before you set your heart on one. They'll be offered in a few colours too, incl. this olive green, baby blue and no doubt some other sweet colours that Fly specialise in. 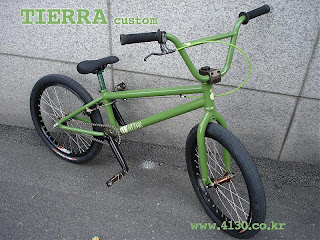 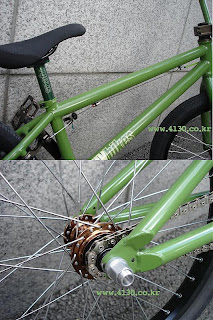 First person to get one and run a slammed Stump post wins*!

i want one n mi seat post will definatly be slammed... cos its oni 3 inch long... the seat post that is..