To quote me from a few days ago:


I think I'm now the only person involved in BMX who isn't at The Pool, but bills needs paying and work needs doing. The final stages have been revealed, and the setup looks absolutely nuts. Head over to Defgrip where they've done the hard work so I don't have to, haha.

As a bit of a warm-up for watching some Dennis Enarson footage, here's a video from his recent trip to The Caribbean with a bunch of other dudes that ultimately ended up being covered by Dig in the form of an article and this video.

In related "Dig videos and articles" news, here's an edit of Stefan Lantschner and Simone Barraco by Matty Lambert that featured as an article in the new Dig. I thought I'd seen this already and wasn't really into it so I sort of avoided watching it the past few days, then happened to check it out again now and realised that not only had I not seen it before, but it's also an awesome video.

Briefly heading back to the Defgrip theme, here's a cool feature with Darryl Tocco. The dude's got a point...

It still doesn't really seem right seeing a Props trailer without that music, but the riding in this is legitimately nuts. Could pretty much watch Garrett Reeves footage all day.

In a slight contrast (and you know I'm all about the contrasts), from the glitz and glamour of Props to the more down-to-earth scenes of London, Bristol and Sheffield, here's Marv's video "Fair play".

This is pretty up-to-the-minute - here's a fresh edit of practise from The Pool which is reinforcing my feelings of being disappointed I can't make it and also showing how nuts it's going to be. Should be interesting checking out the differences between those sticking to the jump-box and those riding the whole setup. Speaking of, Brian Foster is going to be riding, and also has a signature frame and a bunch of other stuff coming out through Fit.

In a move that's no doubt going to somehow become as needlessly controversial as the "Why are there only white riders on the 'Role Models' issue cover?" internet-fuelled debacle of a few years ago, Ride have dedicated their next issue to a UK scene check with a strap-line of "This Is England". Should hopefully be some cool stuff in it though, so as long as you keep your eyes off message boards and comment fields it should be hunky dory. Click here to view Owain Clegg bagging himself a cover.

Want to see some ridiculous "messing around" footage of some awesome riders? Of course you do...

Seth Kimbrough has been awesome for what seems like forever, and it's cool to see how his style has adapted and changed over time. This video's got what I'd consider to not really be his usual sort of stuff in it, but it's fully awesome.

This S&M teaser/intro features Cameron Wood, Randy Brown and someone smashing a wheelie on a quad. I'm not not going to post it (double negative, you work it out...).

...and that's pretty much that.

As a little Brucey Bonus too, in the intervening period I found a photo of the new Sergio Layos grips from Fly. 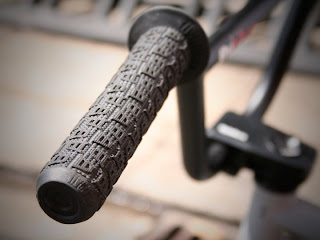