Pijin Spoke Calculator gets a new home in "the cloud"

Firstly, let me apologise for the contents of this post. It's only for those with an interest in calculating spoke lengths... or those who like computing stuff. If neither apply to you, then you might as well stop reading here before I bore you to tears.

One of my jobs at Pijin is looking after all the computer related stuff. Around 4-5 years ago, I wrote a little tool to help calculate spoke lengths. It was only meant to help us out at the shop to save some time measuring rims and hubs. I thought it was useful and put it up online so anybody could use it if they wanted to (for free!).

So all I did was connect the server we had running underneath our counter to the shop's broadband router. Pretty primitive setup - and pretty slow bandwidth. Didn't really matter as it was only used to transfer some spoke lengths and not bandwidth hungry images/video.

This was all fine until a few weeks ago, when our accountant, Ollie (he is a menace), mistook the electrical mains switch for a light switch and abruptly cut the power to everything. This was too much for our poor old server to handle and fried the motherboard. Bye bye Pijin spoke calculator. People started calling up the shop and asking where it was - they had wheels to build and were annoyed at the spoke calculator being offline. We know a lot of people and other shops use the spoke calculator, so replacing the old server under the counter where it was always prone to having tea or coca-cola spilt on it was not really the best option.

The spoke calculator has now been moved to the 'amazon cloud'. In short, it's now hosted on the same infrastructure as Amazon (yes, the online bookstore), where the network connection is super fast and the hardware a little more protected and reliable.

Sorry for the outage, and thanks for using the Pijin spoke calculator!

Here is a pic of the retired server. You can just about see the coca-cola stains down the side of the white casing... 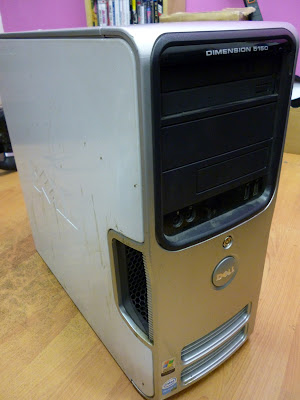